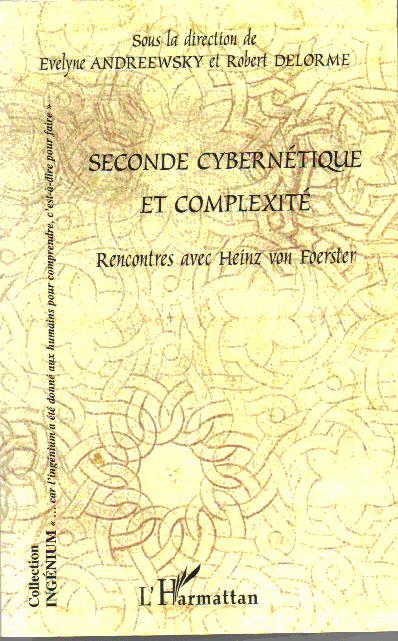 To those wondering how much Foerster has inspired French thinkers, the table content of the presented book shall be eloquent: Henri Atlan, Mauro Ceruti, Jean-Pierre Dupuy, Jacques Miermont, Edgar Morin and Robert Vallée witness how deeply meeting Heinz von Forster has marked their work and their lives.

Foerster did not want his thought to be subsumed under a label, and therefore never bent himself to write a philosophical monograph. This book is a collection of homage’s originally spoken on October 2004 in Paris. The AE-MCX (www.mcxapc.org) and AFSCET (www.afscet.asso.fr) learned society urged to contribute to spread Foerster seeds in France. The text, written in French, does not only brings to light the commitments of Foerster to science, but also to humanity and citizenship, making his words quite present and challenging.

The intervention of Edgar Morin has to be highlighted. Not only is he a well-heard scientist and philosopher in France and other Latin countries, but also a man who has deeply understood and brought into action Foerster’s conceptions. He covers Foester’s epistemology in five points. (1) At first, his fundamental problematic about knowledge. Morin rehabilitates the idea of “Order from Noise” along with “Order from Order” and “Organization”, the later two being generally better accepted. He reminds us of example of these notions and how they are interlaced. (2) Auto-organisation is a keystone for many developments in life and human sciences: Foerster has shown the path to conceive the “autonomy in the dependence” and therefore to overcome the barriers to knowledge rose by determinism. By introducing retroaction and recursivity he has finally brought to us notions of complex causality, overcoming the unsatisfactory linear causality. (3) “Detrivialisation” of knowledge has to go with “detrivialisation” of the living, or we will never understand the diversity of our world. (4) The knowledge of knowledge, term of the second-order, typically Foersterish, is offered as an alternative to “epistemology”. By sustaining the recursivity, knowledge and truth are no more frozen and in the possession of a minority, but forever contain a part of translation and reconstruction by its carrier. This opens on a lecture of what is consciousness and on the reason why circularity between a subject and an object cannot be broken. (5) The last but not the least point is about the implication of these in our actions: to develop freedom. Foerster’s epistemology opens on ethics: the necessity to think at the second degree favours possibilities of freedom, for us, and the ones we live with.

Henri Atlan brings a contribution on actualisations of some of Foerster’s work on auto-organisation. The two men shared a great interest in defining and understanding auto-organisation. From their interactions, it’s now well known as a phenomenon to be interpreted in the mean time as an increase of redundancy and as an increase of variety. Atlan has prolonged the exploration of this concept trough the usage of numeric simulation (networks of computer neurons), what he demonstrates in his speech. He presents his experimentations to simulate structural auto-organisation, but also functional auto-organisation, the later giving access to an understanding of the emergence of functions : his simulator behaves as if it had “recognised” forms or pattern of inputs. The next step is to have “intentional” machines, machines of which the finality is an emerging property. For this, we would, at first, have to consider an extra device that could memorise final states and steps to achieve them. And after revisiting the concept of teleology and rational action to clean them out of mechanical causality, Atlan gives another condition: the existence of a second network, a “perceptron”, able to learn association of final States and Causes and in which, the most frequent learning will progressively emerge as desired goals. This line of thought finally opens on specifying the concepts of action and intention, as the reader will discover it.

The intervention of Mauro Ceruti is a philosophical point of view on two of Foester’s leading thoughts: the “cognitive blind spot” and constructivist ethics. The first one is related to the question of “knowing that one does not know”. From individual representations to major scientific theories, the construction of knowledge appears to be the complex conjunction of many processes looking opposite: comforting former cognition or finding exception, variations in the quantity or in the quality of considered events, finding continuity and breakings... Ceruti goes through history and points the misleading effects of denying knowledge dualities. Then with a wealth of example, he introduces the necessity of constructivist ethics: not knowing what we don’t know, we shall be careful not to claim absolute rules but rather feel responsible, as individuals, for keeping choices open, increase consciousness, build serenity and learn with others to make decisions.

The reader will also appreciate that Jean-Pierre Dupuy, taking four moments of Foerster’s life, makes him/her feel how deep Foester’s thoughts are built from experience. Jacques Miermont gives a large sight of strong inputs from Foerster to psychology and psychiatry, from theory to clinical applications. Robert Vallée shares his work on the “Eigen-Values”, that made him close to Foerster.

Evelyne Andreewsky and Robert Delorme, directors of this publication, have taken care of the reader unfamiliar with Foerster by reproducing, in a second part of the book, a French translation of two of his major communications.             In Responsibilities of Competence, Foerster (1972) presents cybernetics as a bridge for “hard science” competencies to contribute to the scientific treatment of the hard problems “soft sciences” are dealing with. He sets the core of cybernetics around the interlaced conceptual network of regulation, entropy retardation, and computation that he then applies himself to defining. Foerster’s claim is that understanding cybernetics along with these concepts would give adequate methods to treat hard problems, namely neurosciences, education, society and humanity. Finally, the scientist, made competent by cybernetics, becomes responsible to act towards a better world.

Ethics and Second Order Cybernetics (1990) was originally spoken at a major conference on family therapy in Paris. It connects the reader to a field of great expression and development of Foerster’s constructivist approach: psychology. Leaning on circularity and the inclusion of the observer in the observation, Foerster make the audience feel how radical and eventually frightening can be the epistemological change suggested by cybernetics. But actually, he goes far beyond, at first pointing the opening it makes in human sciences and more over showing a way for the expression of ethics. As spoken language makes ethics easily fall into morale, Foerster calls to Metaphysics (field of undecidable questions) to remind us our individual responsibilities and to Dialogics to set words-free inter-action as an alternative communication channel. In Foerster’s words, Ethics can free itself of being explicit thanks to its sisters, Metaphysics and Dialogics. He finishes with a proposal to define humanity that fully justifies recommending the reading or reading again of this text.

Because this book has something of the story telling of cheerful meetings, Foerster is made more accessible to novice, but it does not give up anything of its intellectual sharpness. Henri Atlan and Edgar Morin in particular give a hand to those wanting to know more about their work rooted in Foester’s land and slowly making its way through the scientific community and the French speaking community.

Originally spoken in 1971 at the American Society for Cybernetics conference and translated in French by E. Andreewsky for this publication.

Heinz von Foerster (1911-2002), at once mathematician, physician, philosopher, transdisciplinary theoretician, magician,… had many strings to its bow ! He has strongly contributed to the approaches of complex systems by creating cybernetics of observing systems, that renews the first cybernetics, and by actively participating to the auto-organization theory. These contributions witness scientific and human qualities of the one that as been qualified “Socrates” of cybernetics.